NodeRun (noderun.com) is a free, cloud-based IDE and community for Node.js developers of all skill levels. NodeRun differs from other online JavaScript development platforms because it supports full-stack, transactional business development, as opposed to front-end development only.

The platform offers a number of unique features that enable developers to be as much as 10 times more productive compared to traditional application development practices. These features include:

A full list of features is available at: www.noderun.com/about-noderun.

NodeRun was the vision of Profound Logic’s CEO, Alex Roytman, who wanted to give all developers a launchpad to start creating Node.js applications quickly and easily.

“I believe that all businesses can benefit from adopting Node.js in their development efforts,” says Roytman. “NodeRun lowers the barrier for developers and makes it much easier for them to create Node applications for their companies. Node.js is the solution that many businesses have been searching for to address challenges like a diminishing developer pool, and the need to make applications integrated, cloud-ready, and able to support digital transformation efforts.” 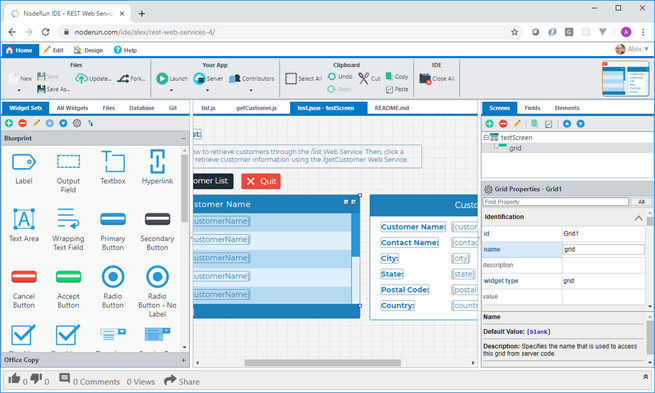 NodeRun business applications are designed to be compatible with any relational database out of the box, including MySQL, Oracle, SQL Server, and IBM Db2.

Node.js as the ideal business language

Node.js has grown quickly in popularity because it uses JavaScript, the de facto standard for front-end code. Being able to use the same language for both front-end and back-end greatly simplifies the process of building applications.

However, in the early days of Node.js, companies were hesitant to adopt it for enterprise business logic. One significant issue that kept organizations from adopting Node is the complexity associated with callbacks and promises, a problem known as “callback hell”.

NodeRun provides a robust set of business application development tools where “callback hell” is a thing of the past. NodeRun also seamlessly integrates your Node.js business logic with a database of your choice. With these capabilities in place, Node.js (or server-side JavaScript) becomes the perfect business application development language and is much more productive than most programming languages available today.

In addition to providing a productive platform for Node.js development, NodeRun is also a place to share and collaborate.

The starting point for noderun.com is a community site where developers can explore other people’s working code, contained within what NodeRun calls “Spaces”.

Each Space can be viewed, opened in an online IDE, forked, or directly launched. Developers can even embed a Space in a blog post or share it on social media. 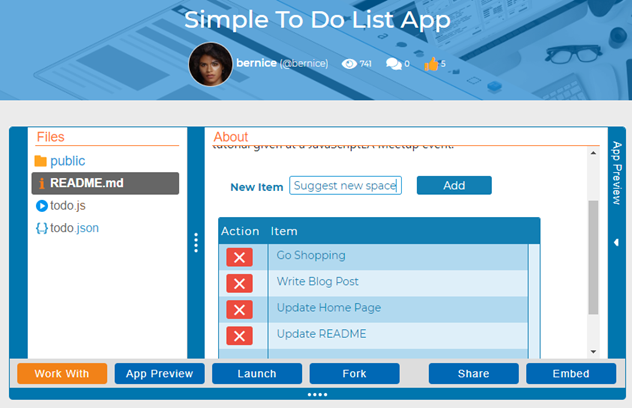 It takes only one click to create a Space and that one click carries a lot of power. Each Space is its own Linux container, with its own files, its own database, its own Git repository, and more.

To set all of this up manually can sometimes take days of effort. NodeRun allows businesses to be more agile because they can spin up proof of concepts very quickly. Developers can rapidly build new Web and Mobile apps, test open source code and packages, or try 3rd party Web Services and API.

“If you see some Node.js code on GitHub, you can instantly deploy it to NodeRun and see exactly how it works”, says Roytman.

Since creating a Space is free, open source Node.js developers and npm package publishers can host running examples of their work on NodeRun without incurring a cost.

Being able to easily work with databases is one of the key capabilities of NodeRun. NodeRun comes with visual tools to create and alter database tables as well as maintain the data. 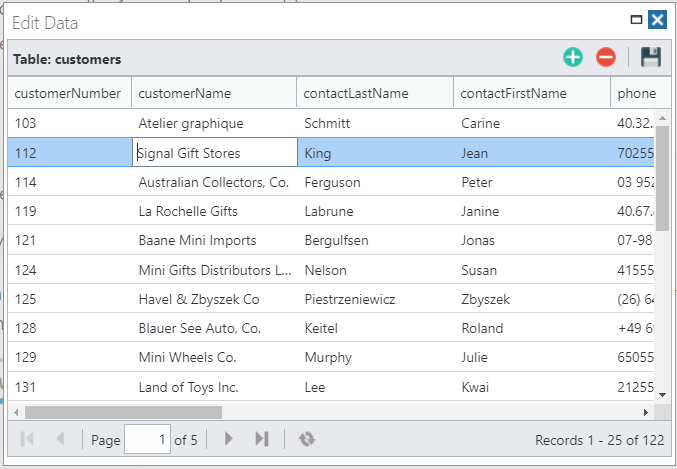 But the real power of NodeRun is in how easy it is to integrate your apps with this data. The connection to the database is inherent, which greatly simplifies the development of database-driven applications for most popular databases.

Full IDE in the cloud

The NodeRun online IDE comes with all the tools a Node.js developer needs, including a full terminal, code editor, debugger, interface designer, and much more.

Because of its seamless Git integration, developers can also deploy applications to NodeRun from other IDEs, like VS Code.

At Profound Logic, our mission is to provide the most innovative solutions for application modernization, development, and digital transformation. Since 1999, we’ve helped thousands of customers around the world transform legacy interfaces and source code, develop modern desktop and mobile applications, and optimize enterprise systems. Our developers are business application development experts, fluent in modern technologies, such as Node.js, Web/Mobile development, and cloud deployment.

We have offices in Ohio, California, Mississippi, and Wisconsin, in addition to partners located around the world. Learn more at www.profoundlogic.com or contact us at 877-224-7768.